RVTG has been training Newfoundlands for over 25 years, which makes us one of the longest running training groups in the UK. We recognise that there are all abilities of Newfoundland and human, and we celebrate successes big and small. However, we are lucky to have helped to train some of the best working dogs in the country, recognised by their induction into the NNC Hall of Fame.

Both Ellie and Phoebe are now veterans (12 and 11 respectively), and have had distinguished working lives. Both have achieved Level 4 diplomas in draught, along with all the multi-passes, and have achieved multi-passes in water up to and including Section D. They have both represented Rother in many, many demonstrations, have visited schools, greeted the public at many events and acted as fantastic ambassadors for the breed. Ellie has also been a canine blood donor.

Rufus was the first Newfoundland in working history to achieve a Level 4 diploma in draught, and also a Section E diploma in water. He took part in many demonstrations and did beautiful jumps out of the boat. He also excelled at Christmas tree pulls and cart rides. He sadly left us too early at age 6, due to lymphoma. You can read a little bit about Rufus here.

Both Mutley and Cassie were loved and owned by John Fleming. Mutley achieved a Section E diploma in water and all of the multi-passes.

Cassie has an unrivalled water record, passing Section E a staggering 15 times and achieving all of the multi-passes and numerous trophies. 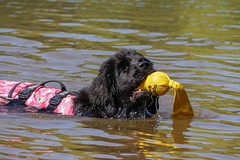 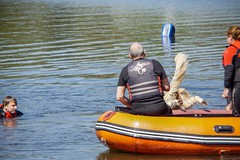 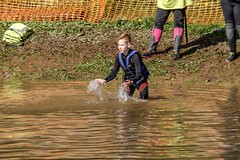